Resplendent Trogons are natives of Central America. There are fifty kinds, and this is the largest. A systematic account of the superb tribe has been given by Mr. Gould, the only naturalist who has made himself fully acquainted with them.

Resplendent Trogons are natives of Central America. There are fifty kinds, and this is the largest. A systematic account of the superb tribe has been given by Mr. Gould, the only naturalist who has made himself fully acquainted with them. Of all birds there are few which excite so much admiration as the Resplendent Trogon. The skin is so singularly thin that it has been not inaptly compared to wet blotting paper, and the plumage has so light a hold upon the skin that when the bird is shot the feathers are plentifully struck from their sockets by its fall and the blows which it receives from the branches as it comes to the ground. Its eggs, of a pale bluish-green, were first procured by Mr. Robert Owen. Its chief home is in the mountains near Coban in Vera Paz, but it also inhabits forests in other parts of Guatemala at an elevation of from 6,000 to 9,000 feet.

From Mr. Salvin’s account of his shooting in Vera Paz we extract the following hunting story: “My companions are ahead and Filipe comes back to say that they have heard a quesal (Resplendent Trogon). Of course, being anxious to watch as well as to shoot one of these birds myself, I immediately hurry to the spot. I have not to wait long. A distant clattering noise indicates that the bird is on the wing. He settles—a splendid male—on the bough of a tree not seventy yards from where we are hidden. It sits almost motionless on its perch, the body remaining in the same position, the head only moving from side to side. The tail does not hang quite perpendicularly, the angle between the true tail and the vertical being perhaps as much as fifteen or twenty degrees. The tail is occasionally jerked open and closed again, and now and then slightly raised, causing the long tail coverts to vibrate gracefully. I have not seen all. A ripe fruit catches the quesal’s eye and he darts from his perch, plucks the berry, and returns to his former position. This is done with a degree of elegance that defies description. A low whistle from Capriano calls the bird near, and a moment afterward it is in my hand—the first quesal I have seen and shot.” 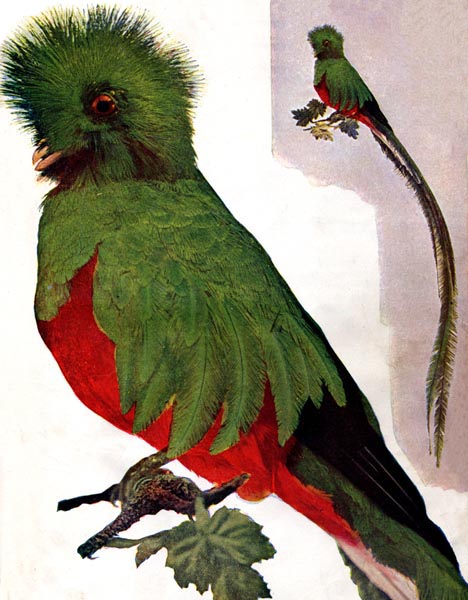 The above anecdote is very beautiful and graphic, but we read the last sentence with pain. We wish to go on record with this our first number as being unreconciled to the ruthless killing of the birds. He who said, not a sparrow “shall fall on the ground without your Father,” did not intend such birds to be killed, but to beautify the earth. The cries of the quesal are various. They consist principally of a low note, whe-oo, whe-oo, which the bird repeats, whistling it softly at first, then gradually swelling it into a loud and not unmelodious cry. This is often succeeded by a long note, which begins low and after swelling dies away as it began. Other cries are harsh and discordant. The flight of the Trogon is rapid and straight. The long tail feathers, which never seem to be in the way, stream after him. The bird is never found except in forests of the loftiest trees, the lower branches of which, being high above the ground, seem to be its favorite resort. Its food consists principally of fruit, but occasionally a caterpillar is found in its stomach.

This site uses cookies. By continuing to browse this site, you are agreeing to our use of cookies. More Details Close